The Teatro da Universidade de São Paulo (Theater of the University of São Paulo) – TUSP aims to disseminate the performing arts in its various manifestations and forms of expression, to stimulate discussion and reflection about Theater-making in Brazil, to encourage the development of university theater groups – especially at USP campuses – and to provide, through theater, the integration between the community inside and outside the University, in its own projects and in partnership with other units.

Since 1996, TUSP is located at a historic building on Maria Antonia street, in downtown São Paulo. It offers rich programming of theater performances, meetings, lectures, seminars, exhibitions and festivals, defined by invitations, curatorships, and schedules of its own. It aspires to provide visibility to research and theatrical production in the university context, contemplating projects fresh out of training schools as well as those made by established companies.

TUSP also seeks to encourage cultural production beyond its headquarters, in the State’s countryside, operating in several USP campuses. The actions held in the countryside are potentialized by the presence of cultural agents who build new spaces for dialogue amongst different audiences, communities and artistic languages at the campuses. 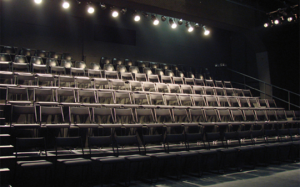 The standouts on TUSP‘s regular schedule are the Mostra Experimentos, that is held annually and aims to provide space for drama school productions; the Circuito TUSP, which promotes theatrical performances, integrating capital and countryside campuses; and the Programa TUSP de Leituras Públicas, which has an educational nature and enables the contact with dramaturgical text. Moreover, it carries out – both in the capital and in the countryside – art assemblies entitled a(P)artes da Vez, where university art groups perform via aesthetic interventions. Based on these meetings, the Jornada TUSP de Teatro Universitário offers a reflection space for college theater companies from all across the state.

In 2013, TUSP held the I Bienal Internacional de Teatro da Universidade de São Paulo, themed Realidades Incendiárias. Besides shows and performances, the festival brought debates, workshops, and conferences with guests and national and international groups. The second edition of this event is planned for 2015, and it is already a part of USP’s cultural calendar.

Furthermore, TUSP also publishes a magazine called aParte XXI, dedicated to the performing arts and to the contemporary artistic and cultural production, as well as other publications related to these topics.