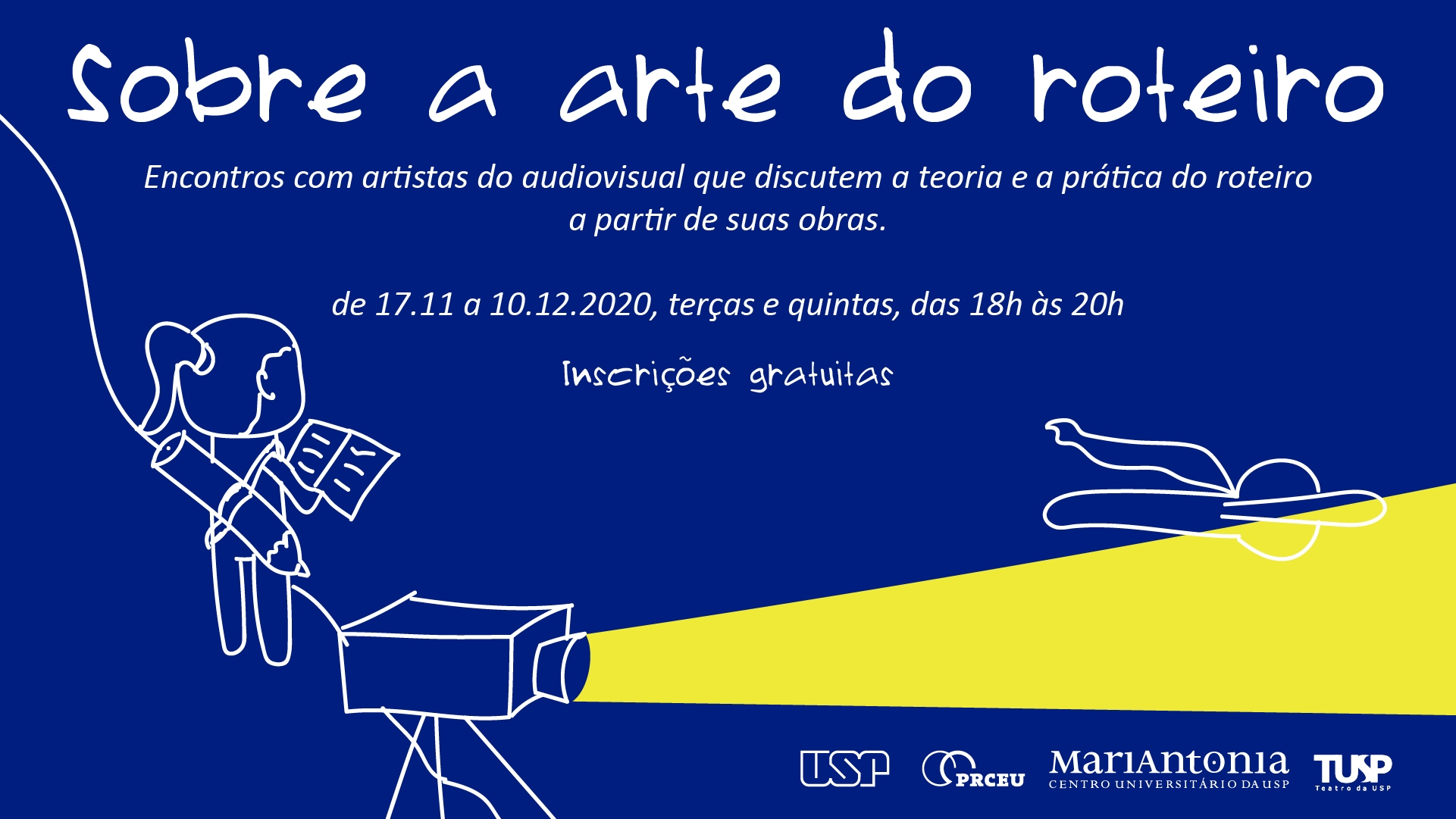 The University of São Paulo Theater (TUSP) and the Maria Antonia University Center USP promote, as of November 17th, the workshop Sobre a arte do roteiro (On the art of screenwriting). The eight virtual, free meetings bring screenwriters and filmmakers to discuss the theory and practice of screenwriting based on their works, always on Tuesdays and Thursdays, from 6 to 8 pm.

Nine guests present an inventive and authorial production and bring their personal view of the screenwriter’s work from unusual angles. Issues such as action structure, character composition, writing methods, and counter-hegemonic modes of representation will be addressed.

The meetings are free of charge and will take place on the streamyard platform. Registration is open until November, 10th on https://forms.gle/ygUc8Z17MpkH8sku5. The link to each meeting will be sent to those who are registered.

Participants who have at least 70% attendance will receive a declaration of participation.

A palavra como imagem: pensando o lugar do texto no cinema (The word as image: thinking about the place of the text in cinema)- Marco Dutra and Caetano Gotardo

Marco Dutra is a filmmaker and composer, director of films such as Quando Eu Era Vivo (2014) and O Silêncio do Céu (2016). Winner of the Leopardo de Prata at the Locarno Film Festival in 2017 with the feature As Boas Maneiras, co-directed by Juliana Rojas, with whom he also directed Trabalhar Cansa, which premiered in Cannes at the Un Certain Regard (2011) showcase. Todos os Mortos premiered in February 2020 in the Official Competition of the Berlin Film Festival and marks Dutra and Gotardo’s first co-direction.

Caetano Gotardo is a director, screenwriter, and editor. He has written and directed ten short films, all shown in national and international festivals, and has directed three features: O que se move (2012), Seus ossos e seus olhos (2019), and Todos os Mortos (2020), the latter in partnership with Marco Dutra. As an editor, he is responsible for Trabalhar Cansa (2011) and As Boas Maneiras (2017), by Juliana Rojas and Marco Dutra, among several other partnerships.

Jaqueline Souza is a producer, screenwriter, and consultant. She wrote the short animation Julieta de Bicicleta, selected in several international film festivals and nominated to the Prêmio Brasil de Cinema Infantil and to the Prix Jeunesse-ComKids, and winner of the Audience Award at the Festival Divercine (Uruguai). She co-scripted the short filrm Angela, by Marília Nogueira, nominated for the Grande Prêmio do Cinema Brasileiro 2020. Scriptwriter for the series Boca a Boca, de Esmir Filho, a Netflix original production. Founder of Tertúlia Narrativa.

Marta Nehring majored in Philology at the Faculdade de Filosofia, Letras e Ciências Humanas (FFLCH)/USP, where she took her Master’s degree in Literary Theory. She holds a Ph.D. in Cinema from the School of Communications and Arts (ECA)/USP. She won awards with the documentary 15 Filhos and the screenplay for the feature Eu, eu, eu José Lewgoy. She collaborated on the soap operas Tititi, Sangue Bom, and A Lei do Amor, by M. Adelaide Amaral and Vincent Villari. She co-wrote the feature film Tudo o que Aprendemos Juntos, and wrote the docudrama series Mil Dias (History Channel). She teaches audiovisual narrative and screenwriting in institutions such as Sesc, AIC, B_arco e Faap.

Nina Kopko has a degree in Cinema from the Universidade Federal de Santa Catarina (UFSC) and works in the areas of screenwriting, directing, project consulting, and casting. Assistant director of A Vida Invisível by Karim Aïnouz (2019), best feature of the showcase Un Certain Regard of the Cannes Festival and of O Silêncio do Céu, by Marco Dutra (2016). Assistant director and scriptwriter collaborator for Guigo Offline (René Guerra, 2017) and the series HQ – Edição Especial (HBO, 2016). She is currently a tutor in the Laboratório de Roteiros da Escola Porto Iracema das Artes and works on the script of series and feature films in development.

Affonso Uchôa is a filmmaker. His first film, Mulher à tarde (2010), was shown at the film festivals of Mostra de Tiradentes, Semana dos Realizadores and Uruguay International Film Festival, among others. He directed A Vizinhança do Tigre (2014), awarded at the Tiradentes Film Festival (2014) and other festivals. He is co-director of Arábia (2017), voted the best film of 2018 in the ABRACCINE, APCA, Folha de São Paulo and SESC Best Films polls, and was voted one of the 100 best films of the decade by the International Cinephile Society (ICS).

Alice Marcone is a screenwriter, actress, singer-songwriter, and TV host. In 2019, she scripted the series Noturnos for the Canal Brasil, Setembro for Amazon Prime Video, and was a script collaborator for HBO’s Todxs Nós. She is the first transgender woman to launch a career as a sertanejo singer, with the single “Noite Quente”, released in the first quarter of 2020. She hosted the reality show Born to Fashion on E!. She majored in Psychology at USP in 2017.

João Dumans is a screenwriter and director. He directed, in partnership with Affonso Uchoa, the feature film Arábia, Best Film of the 50th Brasília Film Festival. He has worked as scriptwriter and editor in several films, such as Os Residentes, A Vizinhança do Tigre, A Cidade onde Envelheço, Os Sonâmbulos, Sete Anos em Maio, and as a script consultant in Joaquim, A Fera na Selva, Canção ao Longe, and Welles na terra no silêncio. He writes occasionally in magazines and film festivals catalogues.

Sobre a arte do roteiro (On the art of screenwriting)