The Maria Antonia University Center (CEUMA) is installed since 1993 in the historic buildings where the former Faculdade de Filosofia, Ciências e Letras da USP – FFCL was located. Over two decades of multidisciplinary action later, it earned its place among the city’s cultural institutions, guided by a broad education concept. Strategically located in the central region of São Paulo, in an area with a large amount of cultural and educational institutions, it serves a diverse audience.

Since 1999, Maria Antonia – as the building is known – has kept a program of art exhibitions with about 20 exhibits a year, with the general guideline of bringing together contemporary artists from different generations, providing space to the most diverse techniques and production areas, as well as architecture exhibitions and retrospectives aimed at discussing the recent past of Brazilian art.

It offers monthly short courses linked to the humanities and the areas of the arts in general. It also promotes lectures, debates, and workshops with experts Brazil and abroad, as well as other events that result from the research of various units of USP and partner institutions.

It also holds the Biblioteca Gilda de Mello e Souza (Gilda de Mello e Souza Library) with a collection mainly dedicated to contemporary arts and related areas. Its generating center is a collection of books on art, aesthetics, and history of art that belonged to Professor Gilda, the first professor of Aesthetics at the Faculdade de Filosofia, Ciências e Letras da USP. 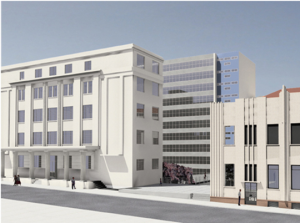 On October 2017 the new building “Joaquim Nabuco”, which also belonged to FFCL-USP, was inaugurated. The project, awarded by the Instituto de Arquitetos do Brasil and the Fundação Bienal de São Paulo, includes more exhibition spaces, a new auditorium for music, a café and also an inner square with green areas, which creates a new public space, a breath of fresh air in the middle of the densely built surroundings, contributing to the revitalization of the downtown area.